The economic development of Vietnam now has a permanent monument in one of the world’s most prestigious seats of learning. After a $207m investment announced early this month by Sovico, a Vietnamese holding firm, the University of Oxford’s Linacre College (for graduate students) is set to be renamed after Nguyen Thi Phuong Thao, its chairwoman.

Thao College is a marker of a significant shift. As recently as 2012 Vietnam was a land without dollar billionaires. Today six are thought to have joined the club, according to Forbes, a magazine. A surging stockmarket means the list is likely to get longer. Whereas American and Chinese billionaires are in the cross-hairs from their respective governments, Vietnam’s wealthy entrepreneurs are the beneficiaries of the authorities’ ambition to foster internationally competitive national champions.

Top of the list is Pham Nhat Vuong, founder of Vingroup, a sprawling conglomerate—and the first to enter the billionaires’ club, in 2013. It is hard to find parts of the domestic-services sector that Vingroup has not touched, from tourism to hospitals, from pharmacies to education to car-making. It vies with Vinhomes, the property arm it spun off in 2018, as Vietnam’s largest private firm by market capitalisation. Each is worth a little over $15bn, a scale that could admit an American firm to the s&p 500 index. 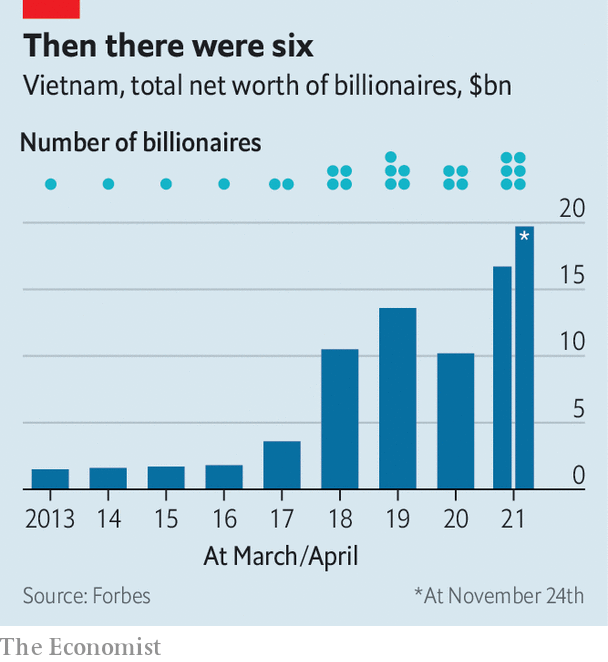 Mr Vuong has since been joined by more tycoons, including Ms Thao. Masan Group, a consumer-focused conglomerate, and Techcombank, one of the country’s largest lenders, have close links through their founders, Nguyen Dang Quang and Ho Hung Anh. All four share a curious start to their entrepreneurial stories: they originally launched commercial ventures in the former Soviet Union.

The Soviet link is a function of Vietnam’s modern economic and political history. In 1985 Vietnam had a gdp per person of around $500 in today’s dollars, one of the lowest in the world at the time. Until the collapse of the Soviet bloc, bright and politically connected students in Vietnam gained opportunities to study in Russia and its various satellites; in 1980 around 3,000 did so, alongside youngsters from other communist-run places.

Those who found themselves in the region in the late 1980s and early 1990s uncovered more opportunities for profit than in Vietnam. Mr Vuong launched a brand of instant noodles, Mivina, which became a domestic staple in Ukraine. Ms Thao made her first million dollars at university in Moscow, importing office equipment and consumer items from East Asia.

Later, as Vietnam’s development continued, they were some of the few citizens outside the country with starter fortunes to invest at home. The government welcomed back this so-called “patriotic capital,” according to Bill Hayton, author of a book on the country’s rapid rise. “They were getting bigger at the time the party state needed them, so it became a sort of symbiotic relationship,” he says.

In recent years the state’s relationship with the tycoons has grown even closer. Nguyen Xuan Phuc, the former prime minister, spoke recently of Vietnam’s need to produce internationally competitive business giants to continue its rapid growth. That friendly attitude can translate into an easy ride; such unofficial government assistance is particularly handy for gaining use rights to prime plots of land, which—as in mainland China and Hong Kong—is technically owned wholly by the state. While most of the firms led by the billionaires cater to Vietnam’s middle class, much of their wealth comes from property and banking, according to research by Nguyen Xuan Thanh of Fulbright University Vietnam. Finance and property are the typical domains of oligarchs across the world: operating in a one-party state in such industries requires permissions, licences and close political relationships.

While useful in its own right, diversifying beyond areas that benefit from political patronage can serve as a signal to sponsors that they are backing exciting entrepreneurs. Outside investment brings a further sheen of credibility. This month sk Group, one of South Korea’s largest conglomerates, announced a $340m investment in Masan Group’s consumer-retail arm. That follows a $400m investment from Alibaba, a Chinese e-commerce giant, earlier this year. sk Group also owns 6% of Vingroup.

Former oligarchs who stuck to the old-school playbook of banking and property have not felt the warm glow of state support consistently. Nguyen Duc Kien, founder of Asia Commercial Bank, and Ha Van Tham, chairman of OceanBank, were given lengthy prison sentences for corruption in 2014 and 2017 respectively. Mr. Tham’s deputy was sentenced to death at the same time. As the experience of many oligarchs both in Vietnam and around the world shows, being in government’s good books can be a tremendous advantage but also carries risks. For the current crop, their reputation as valuable entrepreneurs and innovators will be key to remaining in the state’s good graces.

Want to join the discussion?
Feel free to contribute!